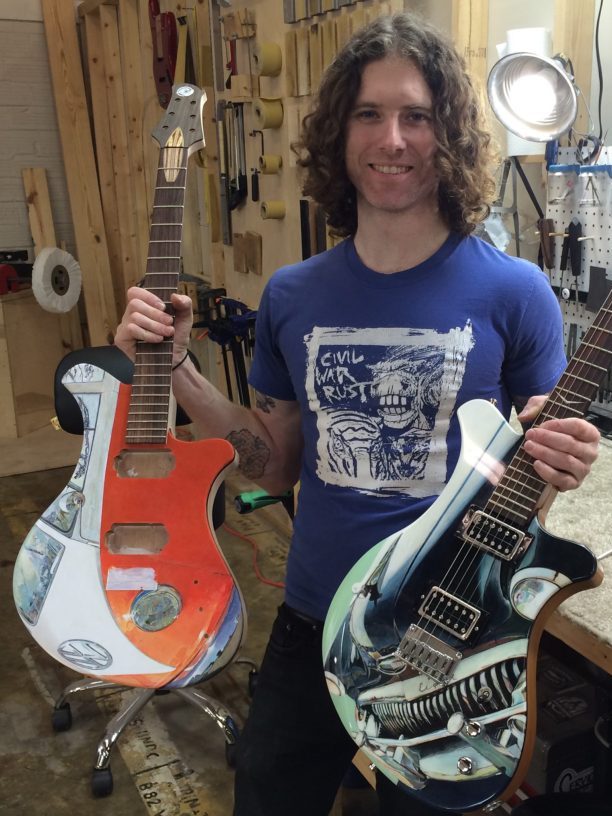 When I was growing up in Northern California, my father flew airplanes for a living, but one of his hobbies was guitar making. He was brilliant at it, and I was amazed by it. I used to sit at his bench in the garage for hours and watch him work. Little by little I became more involved, and eventually I was making guitars with him. There’s a good chance that I was the first kid on the block that was taught how to use a table saw and a pin router. James Creston and I were good friends in our teenage years, and we played in a band together in high school. He too, spent time watching my dad work on guitars, and showed an interest in the craft himself. These experiences would later develop into a long-term business partnership.

In 2005, I moved to San Diego and got a job selling custom instruments for Carvin Guitars. I was also making guitars from scratch in my free time, exploring different ideas and designs. I began receiving commissions for custom instruments, and subsequently decided to move to San Francisco to actually pursue a career as a luthier. James was the first person I called.

In 2008, we built a shop in the East Bay and spent the next several years refining a guitar line, and building custom instruments for clients around the Bay Area and beyond. At the time, I was also repairing, restoring, and customizing instruments, as well as teaching repair workshops at one of the nation’s premier instrument repair shops: San Francisco Guitarworks.

In the fall of 2012, I took the opportunity to move to New York City to become a luthier at Fodera Guitars in Brooklyn. There, I worked directly under Vinny Fodera and got the chance to really cut my teeth as a high-volume production luthier, utilizing woodworking techniques and hand tool skills from a bygone era. I eventually became the production floor manager of the luthier shop and oversaw all aspects of production flow, as well as hiring and training of personnel, while continuing to build custom basses at a bench across from Vinny. During my tenure there, I had a hand in making over 1,200 high-end boutique instruments for customers around the world and for artists such as Anthony Jackson, Victor Wooten, Felix Pastorius and Matt Garrison.

In 2016, I moved to New Orleans and became a partner at Strange Guitarworks with Benjamin Strange. My role at Maret Guitars as the head luthier and designer now takes place from this location. James, who had been running the California location as a guitar repair shop when I moved to the East Coast, began milling our cache of kiln-dried lumber and processing guitar parts, then shipping them to New Orleans for me to complete. In addition to custom guitars I build here using alternatively sourced materials, this is the way we work – and we’re making higher quality instruments than ever before! I’m proud to be a part of such a creative and energetic team, I’m grateful for the ability to continue exercising my craft, and I’m excited for what the future brings!